We have found many instances where social media censored and eliminated accounts of conservative voices:

And this was only up to 2016, now it got worst: to the point where Facebook CEO Mark Zuckerberg admited,  in a congressional testimony, a left-wing political bias in his company in Silicon Valley.

Is this new? Have we seen these type of censorships and media thought-policing before?

Here are the pure FACTS the left don’t want you to see.   To show you who are the real SISTEMATIC FASCISTS, that since the inception of fascism, it has always been a left-wing trait disguized as all mighty rightousness:

(Radio of the people)

In 1933 in the “Internationale Funkausstellung Berlin” (radio fair of Berlin) was introduced.

Its purpose was to give access to radio to the people.  The radio that Goebbels manufactured with the purpose of giving everyone the ability to listen to Hitler.  In 1933, Adolf Hitler had only been in power for six months and he was obsessed with the idea that he needed to communicate with  ALL Germans.  He found a way creating the Ministry of Propaganda of the Third Reich. Joseph Goebbels, head of the newly created department,  contacted Otto Griessing, an engineer managing a company named Seibt, and ordered him: “In August, during the Internationale Funkausstellung Berlin (International Radio Fair of Berlin), we will introduce the Volksempfänger (People’s Receiver). They will be cheap devices, cheaper than current ones, so every German can have one.”

October 29th, 1938, Goebbels adopted the words of Erich Scholz, the chief of staff of the previous administration: “German radio serves the German people, so everything that degrades the German people must be excluded from it.” But Goebbels went even further. The Volksempfänger had design limitations  so that only stations managed by the regime could be heard.  On the dial, only local stations were indicated (controlled by Goebbels, off course), and from the first military actions in 1938 it was forbidden to listen to any other radio outside the borders of Germany. “Think about this – said a paper attached to the receivers at the time of its sale – listening to foreign broadcasts is a crime against the national security of our people. It is a Führer order punishable by prison and hard labor.”  But in some areas, at night, & with special antennas,  they would make it possible to tune into radios from others parts of Europe, or radios not controlled by the Nazi party.

In the territories occupied during the war, the simple act of listening to radio – any other radio – could be punishable by death. Goebbels was clear that the radio was the most apt medium to carry the uni vocal message of the Nazi government. So was the cinema, but producing it was more expensive and took more time. The immediacy to carry the word of Hitler – all his speeches were transmitted by radio broadcasts – to German homes strengthening the intensity of his word.

The high price of other receivers limited their access. In these days, many radio listener clubs were created to organize social gatherings to listen to one same device as a group, but the people wanted one in their house. The regime would provide it for them. After 1938, the government intensified an aggressive sales campaign and ordered manufacturers of other brands, such as Siemens and Telefunken, to give priority to the production of VE301 and DKE.

Control of the media (media law)

Now that the problem of how to deliver the message was solved, Goebbels dived directly into content. The programming was restructured so that no one would talk about anything that contradicted the official word and so that each musical note, each sound, was consistent with the ideas and praxis of the Nazi party. ALL OTHER VOICES WERE SUPPRESSED.

Not only the speeches of the Fuehrer were transmitted, but also those of the top leaders of the party and the government. There were talk shows about National Socialism aimed at the general public and others for specific segments, such as segments aimed at women, housewives and workers. Gradually first and in an accelerated way later, the German classical and popular music displaced – until making it disappear – any music and genre from other latitudes.

Jazz music was eliminated as “negroide and decadent” and the composers of Jewish origins disappeared from any radio broadcast. To reinforce the idea of ​​bringing a radio receiver to each home, the Nazi propaganda apparatus devoted an important budget to publicize massively – in print media, in the cinema and on public roads – the RADIO OF THE PEOPLE. 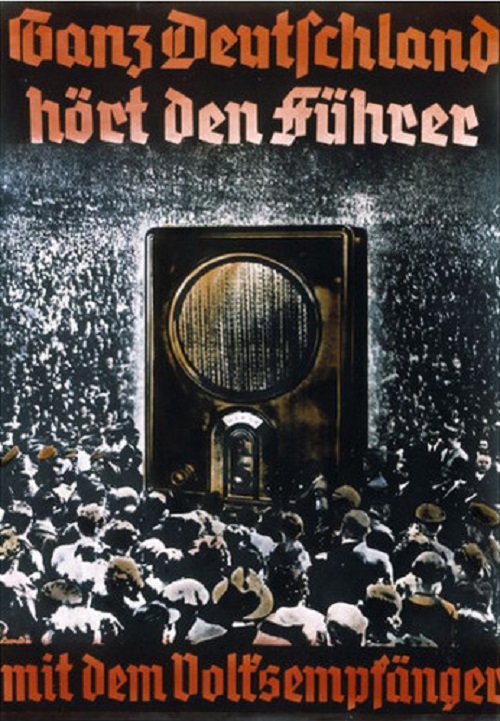 An advertisement found in newspapers, magazines and posters showed a VE301 radio in the middle of a crowd, with the legend “All Germany listens to the Führer with the Volksempfänger.” The medium was also essential outside German territory. An example of this was its use to gain wills in Saar, a territory that was under French jurisdiction at the end of the First World War (1914-1918) and in which a referendum would be held in 1935 for its inhabitants to decide if they wanted to continue as French , return to being Germans or opt for independence.

By the end of 1934, the Goebbels apparatus saturated Saar with more than a thousand radio programs, and in three months he managed to get the territory back to Germany. Years later, the same strategy would be applied in Czechoslovakia, in Poland and in Austria, although with some changes: in addition to positive propaganda of seduction, threatening texts would be also published. The German population had no access to any voice other than the official voice, and this became more evident during the war. So much so, that the audience got fed up with the uniformity, the triumphalist proclamations and reports, and stopped listening to the radio. Goebbels had to correct course . . . He then ordered that at least 70% of the programming be dedicated to light music.

In April 1945, when the allies surrounded Berlin and Hitler took refuge in his underground bunker, Radio Berlin was broadcasting from the ruins, reporting that Germany was about to win the battle of the capital. On April 20, the Führer’s 56th birthday, Goebbels himself proclaimed to the audience that the course of the war was turning in favor of the Nazis. Ten days later, Hitler and the woman he had married hours before, reportedly committed suicide. At half past nine on the night of May 1, the Germans heard in Radio Hamburg that everything was over, with the same martial tone and the same lying line that Goebbels had imposed on them: after interrupting the programming to give “serious important news “, we heard fragments of Wagner’s opera and some chords of the Seventh Symphony of Bruckner, to give place to a sonorous voice: “Our Führer, Adolf Hitler, fighting to the last breath against Bolshevism, fell through Germany this afternoon (it had been the previous afternoon), in his headquarters of the Reich Chancellery.” It was the end of the Nazi regime and also of the Volksempfänger, which ceased to take place immediately, although there were so many devices in operation that gave an electric engineer without money named Max Grundig the opportunity to launch his own venture: fix and sell the receivers created for all Germans. He became rich and later, with his own brand, famous.

Propaganda of the Third Reich

Nineteen points summarize the propaganda system that Joseph Goebbels applied from well before his administration at the head of the Ministry of Propaganda of the Third Reich, until the end of the war.

The most popular one describes his methods in the phrase “If a lie is repeated enough, it ends up becoming true.”

The Downfall of The “F” Word